Deal or No Deal or Remain

As the deadline for Brexit approaches, the calls for another referendum have grown louder. Precisely what question such a referendum would ask is not confirmed, and offering a range of possible answer options could throw up some interesting, and perhaps unexpected outcomes.

To investigate, Deltapoll asked a representative sample of British adults the following question on 26th and 27th November:

This weekend the British government agreed a Brexit Withdrawal Agreement after negotiations with the European Union. Thinking about your view of Brexit, for each of the following please say if it would be your first preference, second preference or third preference.

And those that said that they “did not know”, or “would not vote”, were asked a further “squeeze” question:

“And if you had to choose, what would be your first preference, second preference or third preference?”

The chart below shows the distribution of first preferences in response to the first question, and also the combined results of the two questions. 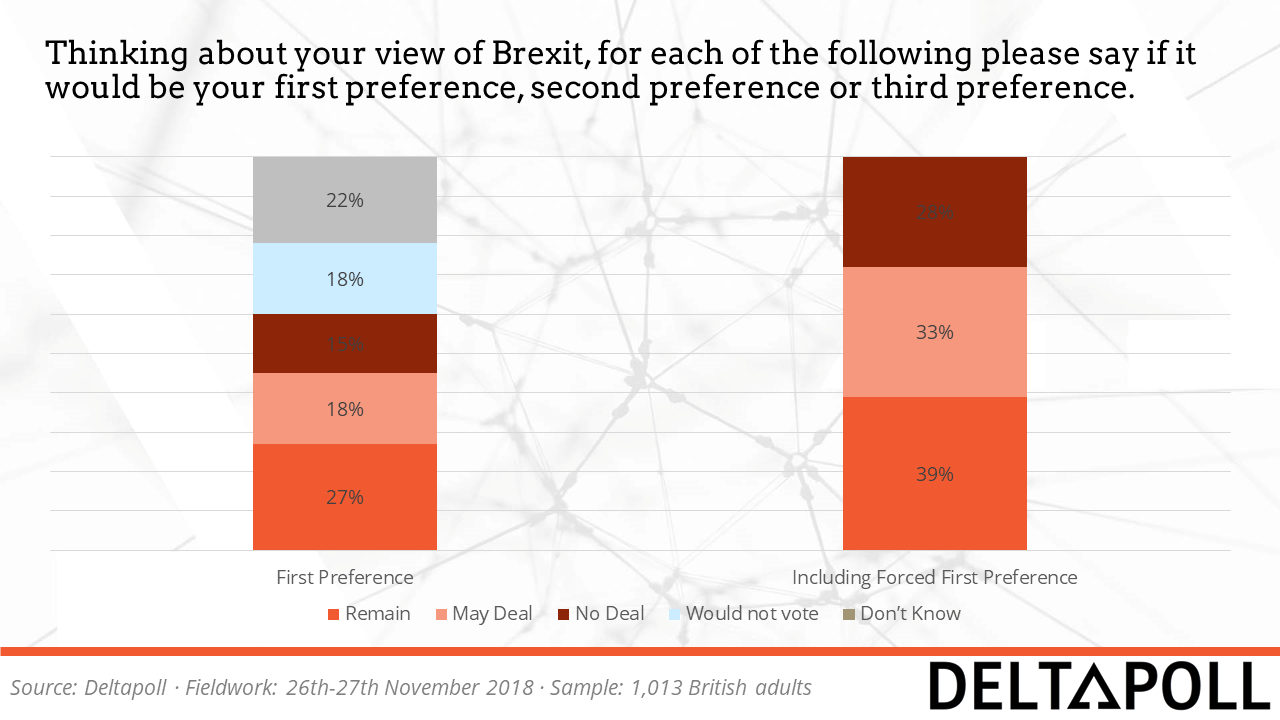 These figures suggest that the outcome of a future referendum using first-past-the-post with all three options on the ballot would be highly uncertain with potential for any of the options to emerge ahead.

Such a referendum, with support for the options relatively evenly balanced, would generate tremendous debates about tactical voting. For instance, if it looks like No Deal is coming third, should their supporters switch to their second preference option to help that defeat their third preference option?

To understand how tactical voting might play out we need to look at the full preference orderings. Given that May’s deal represents a softer, more Remain-like, Brexit than No Deal, we might expect people’s preferences to reflect the idea that the Deal is a kind of middle option. If that were the case then anyone with a first preference for Remain should prefer the deal to No Deal, and anyone supporting No Deal should prefer the deal to Remain. By this analysis no one should rank the Deal third.

But this is not the case as the table below shows. As many as 5% agree with Brexiteer Dominic Raab that No Deal comes first but remaining would be preferable to May’s deal. More numerous, at 13%, are Remain supporters who think that it would be better to leave without a deal than to accept May’s deal. 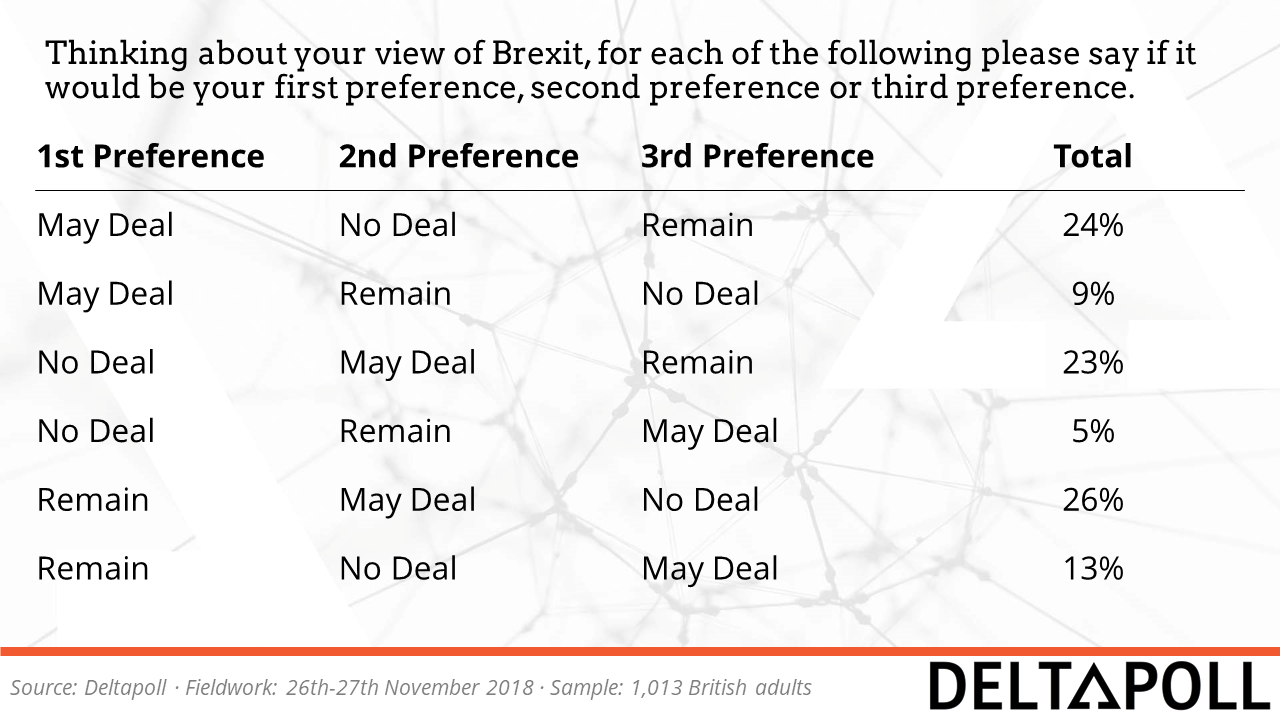 The preference orderings show that most No Deal supporters prefer the May Agreement to remaining in the EU, by 23% to 5%. In a first-past-the-post referendum, faced with polls such as this one, some No Deal supporters might decide to strategically desert their first-preference option in the hope of helping their second-preference beat their least favoured option. That would narrow the contest between the Deal and Remain. But also on these figures, and given the margins of error polls typically experience, No Deal supporters might not want to take the risk of tactical voting. After all, that option is not trailing very far behind the other two and might eventually emerge ahead.

A transferable vote system, such as the one used to elect city mayors, saves voters the bother of worrying about whether to vote tactically by automatically redistributing the votes of those who supported the option that came third on first preferences. If such a system were used, for these data, assuming everyone voted, then May’s Deal would beat Remain by 56:44 after the second preferences of the No Deal supporters were reallocated. Even though Remain starts ahead 39:33 on first preferences, there are enough No Deal supporters who prefer May’s Deal to Remain to overturn the initial Remain lead.

Even though No Deal is the least popular option on first preferences, it would beat Remain 52:48 in a two-way competition according to the preference orderings above. This is because Deal supporters prefer No Deal to Remain by a large margin. 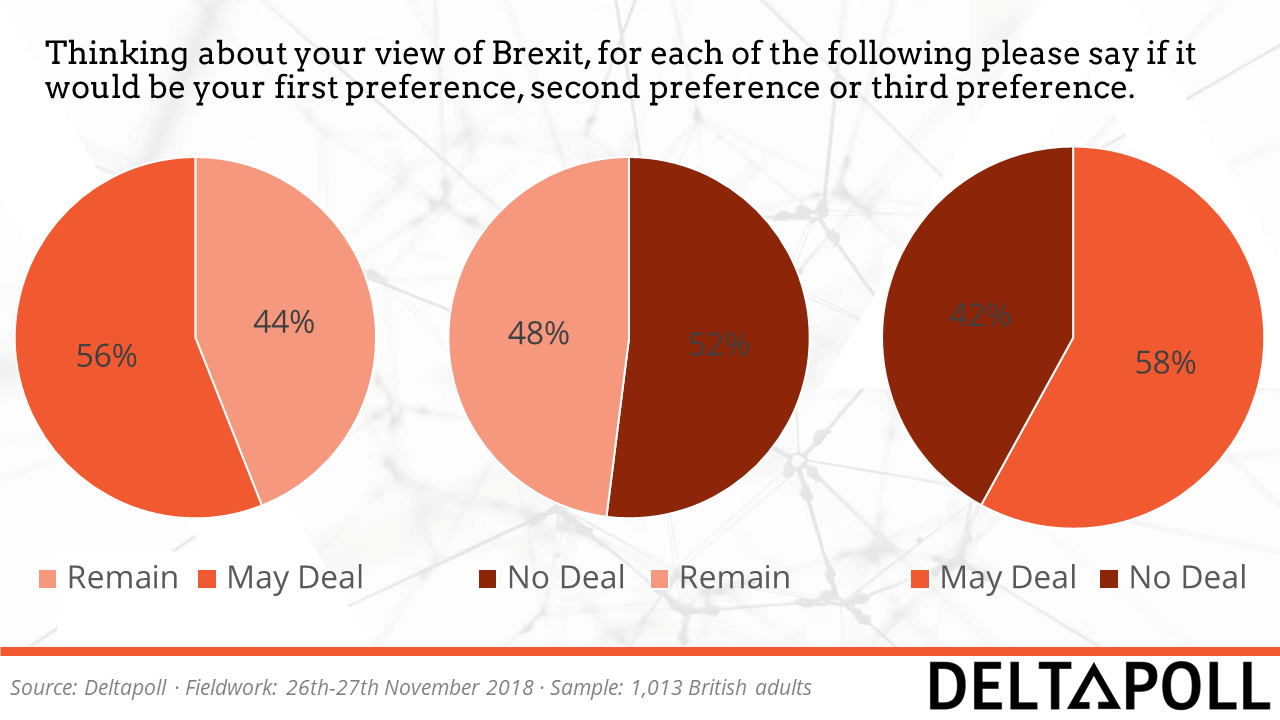 As well as beating Remain in a two-way comparison, the May Agreement would also beat No Deal in a straight contest by a large margin, 58 to 42. The modest first-preference lead for the Deal would be strengthened because Remainers strongly prefer the Deal to No Deal.

It is quite common for the middle option to emerge as a Condorcet winner because the process of pairwise comparisons see voters for each side going to the middle option when their favourite is excluded from consideration. While not everyone’s preferences here are consistent with the Deal being the middle option, as noted above, there is enough of this tendency.

The notion that the Condorcet winner represents the will of the people is a controversial one, especially when it is nearly no one’s favourite. As Matthew Parris has pointed out, not all confrontations are best resolved by opting for something in between. The transferable vote system would actually eliminate the Condorcet winner if it started out last on first preferences.

By contrast, Remain is the Condorcet loser in this poll. It loses in straight contests to either form of Brexit based on the preference orderings of all respondents.

But Remainers should not be too dismayed, and supporters of the Deal should not get too excited by the finding that May’s Agreement would win a three-way referendum with compulsory preference voting. Going back to first table above, as many as 40% of the respondents did not initially offer a preference ordering but only gave one when they had to. Such preferences are likely to be relatively weak and changeable, but they are nonetheless currently distinctive. Whereas 45% of those who gave a preference ordering in response to the first question put Remain first choice, only 30% of those who initially said “Don’t Know” or “Would not vote” put Remain first when they had to choose.

Such respondents are usually less likely to turnout in an actual election and so their preferences are often discounted in opinion polls. If we look just at those who gave an ordering in response to the first question, i.e. taking out the relatively Leave supporting Don’t-knows and Would-not-votes, the result (after transfers) would be very close: 51% for the Deal, 49% for Remain.

Also, whereas No Deal beats Remain if everyone votes, the result is the other way round among those who did not need to be forced to state a preference.

It is not clear who would actually vote if there was a referendum and preferences might change as the kingdom discusses the issues. Hopefully such a debate would generate well-informed preferences and produce a high turnout from all sections of the electorate. At the moment, so far as public opinion is concerned, all sides have everything to play for.

A note on weighting
Deltapoll surveyed 1,013 respondents online on 26th and 27th November 2018. Data are weighted to make them representative of the adult population of Britain with respect to age, educational attainment, gender, region and social grade. The data are also weighted to the distribution of the vote (including abstention) at the 2016 referendum and 2017 general election. Given that, as previous polls have shown, those who did not vote in the 2016 referendum now tend to favour remaining in the EU by a large margin, the results are sensitive especially to how this substantial group are weighted.

All polls are subject to a wide range of potential sources of error. On the basis of the historical record of the polls at recent general elections, with polls of this size there is a 9 in 10 chance that the true value of a party’s support lies within 4 points of the estimates provided by this poll, and a 2 in 3 chance that they lie within 2 points. The estimates excluding those who initially said Don’t Know or Would Not Vote are based on a sample size of 640 and so uncertainty levels for them are larger. 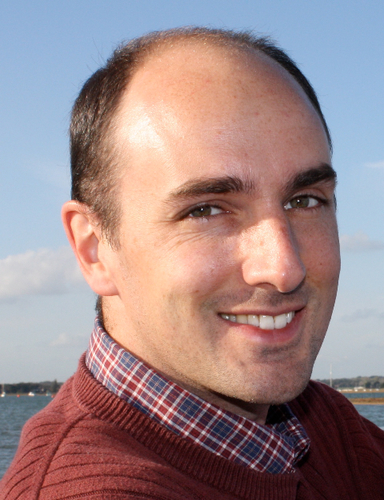